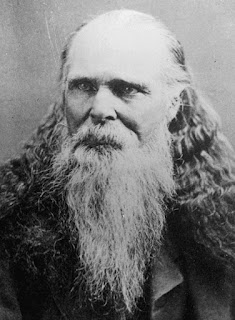 Orrin Porter Rockwell is my favorite historical character. Given his notoriety in his day, he does not get the mention he deserves in the literature—whether dramatic or documentary—of the Old West.

What is written about him tends to be contradictory—some writers presenting him as a cold-blooded murdering gunslinger, others as a righteous gunman who never killed anybody who didn’t need killing. I know from experience that a strong case can be made for either conclusion.

Here’s how it happened. On the night of June 8, 1878, Ol’ Port attended a play in downtown Salt Lake City, then spent some time imbibing in one of the city’s saloons. He made his way on foot a few blocks to the Colorado Stables, one of many of his business interests—which also included the Hot Springs Hotel and Brewery, and cattle and horse ranches in the West Desert. Rockwell kept an office at his livery stable, along with a room with a cot where he sometimes spent the night when in the city. He went to bed feeling poorly and spent a fitful, painful night. He stayed abed the next day, suffering severe stomach pains and vomiting. Late in the afternoon, he sat up in bed, determined to arise, and managed to pull on his boots before he fell back into the rumpled covers and died, just a few weeks short of his sixty-fifth birthday.

Porter Rockwell, like a good man, died in bed. But, like a bad man, he died with his boots on. Life and death are seldom black and white.