It’s getting more and more difficult to watch the news these days. The latest stupid buzz words propagate more quickly and widely among broadcasters than ever before. Some come and go; others entrench themselves as clichés to the point you’d think certain stupid words have become as much a part of news reporting as who, what, when, where, and why.
You can’t report how something appears without referring to the “optics” of the situation. And you must talk about what some eventuality will “look like” even if it’s something you can’t see. Interviews have become “conversations.” And during those conversations you don’t discuss or explain things, you “unpack” them. And correspondents no longer report from, say, Tokyo, or Buenos Aires, they are always said to be “on the ground” there. When there is more than one TV reporter on a big story, it must be pointed out that it’s “team coverage.”
Perhaps I am too sensitive to such nonsense. But when I am on the ground in front of the TV unpacking the latest optics of the day’s events, I can’t help but wonder what the next really stupid buzzword will look like. Perhaps I would benefit from a conversation with another viewer—sort of like team coverage, I guess.

Posted by writer Rod Miller at 8:46 AM 2 comments: 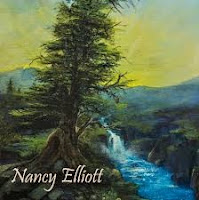 There’s a certain expectation I suspect most Western music aficionados have when sliding a CD into the player (or whatever you call it when playing one of those digital thingies). You expect a rich, vibrant voice accented with a hint of wide-open spaces. You expect lyrics relevant to life in the West, past or present. And you expect to hear guitars and an assemblage of other familiar instruments.
You get all that with Nancy Elliott’s latest release, Tall Tree.
But that’s where Nancy Elliott starts, rather than finishes, with this collection. It stretches the expectations of Western music to the point that she labels her music South-Western Americana.
Backing Nancy’s resonant vocals are the expected instruments, blended with unexpected additions such as pan flutes, eagle bone whistles, native flutes, hammered dulcimer, congas, tumbas, and other assorted drums. The result is music that is undeniably Western, but with added spice that enriches the sound in unexpected and alluring ways.
It’s a good sound. And the songs are darn good, too. Slide Tall Tree from Nancy Elliott into your CD player—you’ll like what comes out. 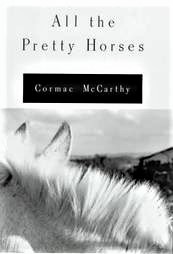 I’ve said it before, and I’ll say it again: some readers love Cormac McCarthy, and some readers hate Cormac McCarthy, and there are very few readers to be found in between.
He’s not a writer you read to “escape.” You know, those kinds of books you crack open and fall into and zone out and breeze through without working up a sweat or having to stop to catch your breath. Or think.
You have to pay attention when you read Cormac McCarthy. And even then, you’re apt to find yourself re-reading a passage here and there because something unexpected happened; a surprise you didn’t see coming but, on reflection, had to happen.
And there’s his style of writing. He isn’t big on quotation marks, so, again, you have to pay attention when he’s writing dialogue. But his vivid language, searing descriptions, complex characters, and stories where a lot happens below the surface will engage your mind and infiltrate your consciousness and never let go.
All the Pretty Horses is one of McCarthy’s masterpieces. It won the National Book Award and the National Book Critics Circle Award, among other honors. And it sold wagonloads of copies for years, and probably still does, which is a rare feat for a Western novel.
It inspired a Hollywood movie of the same name, which I did not see for years. Having read the book several times, instinct told me which aspects of the complex, interwoven stories movie cameras would focus on, turning the tale into something of a high-class soap opera. I was right. What a shame.
All the Pretty Horses by Cormac McCarthy deserved better. It’s a remarkable novel. I think I will now go and pull it off the shelf and read it again.

Posted by writer Rod Miller at 8:36 AM 4 comments: