When President William McKinley was assassinated, a high-toned politician said, “Now look! That damn cowboy is President of the United States.” The “damn cowboy” in question was Theodore Roosevelt. And he remains, to this day—despite a few Texans and a make-believe movie actor—the only real cowboy to rise to that office.

Roosevelt’s cowboy career is chronicled in The Cowboy President: The American West and the Making of Theodore Roosevelt by Michael F. Blake.

Blake outlines the circumstances that sent Roosevelt, a patrician New Yorker, to the frontier West where he established cattle ranches in North Dakota. More than an owner, Roosevelt worked alongside his hired hands and became adept at handling horses, working cattle, riding the range, and surviving in a hard land.

Based on detailed research, Blake relates Roosevelt’s cowboy career to his wider life, telling how the lessons he learned in the West colored his endeavors in government service, the military, politics, and family life. The result is a well-rounded picture of the cowboy president that’s interesting, intriguing, and informative.

You’ll close the book with new understanding of and appreciation for “That damn cowboy.”

Posted by writer Rod Miller at 7:37 AM No comments: 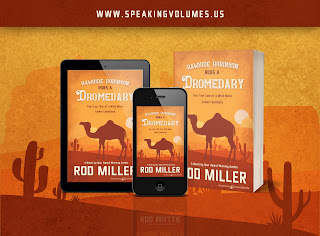 The Western Fictioneers Peacemaker Award and Western Writers of America Spur Award finalist novel, Rawhide Robinson Rides a Dromedary: The True Tale of a Wild West Camel Caballero, is now available from Speaking Volumes in digital bits and bytes. Which means you can download and read it on your Kindle, iPad, smart phone, or other electronic gadget. For us old-fashioned or unplugged types, it is also now available in paperback.

You can read more about Rawhide Robinson, the ordinary cowboy who lives an extraordinary life—much of it a product of his imagination—on his very own web site. Enjoy.

Posted by writer Rod Miller at 7:48 AM No comments: