January 29 is a dark day in the history of the American West. Early on that morning in 1863 the United States Army attacked a Shoshoni winter camp on the Bear River, just across the Utah border in what is now Idaho. As the sun climbed to its zenith, the soldiers slaughtered somewhere between 250 and 350 people, most noncombatants and many women and children. Witnesses also reported torture, rape, and mutilation.
The Bear River Massacre was the first big Indian killing by the army in the West, and it was the worst—more victims than Sand Creek or Wounded Knee or other better-known incidents. And yet it is largely forgotten, seldom finding its place in history books, and accounts are often erroneous.
We visited the killing field on the anniversary again this year, joining with the Northwestern Band of the Shoshone Nation to commemorate the massacre and celebrate the survival of the Band, most of which was wiped out that day.
For many years, the Bear River Massacre has intrigued me. How such a pivotal event in our history can go unnoticed troubles me. I have written about the massacre in a song with Brenn Hill, “And the River Ran Red,” in poems, in short stories, in a chapter of The Lost Frontier: Momentous Moments in the Old West You May Have Missed, and in a history book, Massacre at Bear River: First, Worst, Forgotten.
Never should such heinous actions by our government be forgotten. They remind us of the depravity we were—and are—capable of. Mark your calendars, and join us next winter on that hallowed ground on the banks of the Bear River.

Posted by writer Rod Miller at 6:25 AM 6 comments: 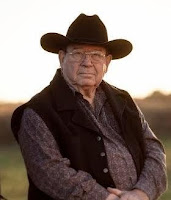 The world lost something big last week. And in that part of the world known as the American West, the loss looms even larger.
Dusty Richards died January 19 from lingering injuries suffered in a traffic accident. Dusty’s death means we’re short one of our finest Western writers, a long-time rodeo announcer, and a lively auctioneer. As if that weren’t enough to fill a lifetime, Dusty also had a successful career in agribusiness, taught school, and broadcast farm reports on television. He served as president of Western Writers of America and was founder and executive editor of Saddlebag Dispatches magazine. And 150 or so Western novels are filled with Dusty’s words. Some of those books have his name on the cover; many he wrote using other names.
Besides all that, and more important than any of it, Dusty was friendly, sociable, kind, and helpful to any- and everybody, anytime. You couldn’t begin to count the number of aspiring writers Dusty helped along the way with encouragement, advice, introductions, referrals, recommendations, and more. I count myself among those he helped, and couldn’t count on all my fingers and toes all the times he went out of his way to show me how to be a writer.
It bears mentioning that Pat, his wife and friend and constant companion, is also lost to us owing to the same accident. We can take comfort in the fact that they are back together after a brief time apart.
And we can rest assured knowing that Dusty is, at this very moment, no doubt bending the ear of Saint Peter—and anyone else within range of his big voice—with an engaging story about the West he loves.

Posted by writer Rod Miller at 8:32 AM 8 comments:

Writing in my sleep.

Over the years I have heard and read any number of ways writers go about their business. Most are relatively straightforward, others a little quirky. There is, for instance, a writer from Texas who strolls the streets at night with pencil and paper in hand, writing as he walks. There are people who do not write unless certain conditions apply: a prescribed number of freshly sharpened pencils all lined up; a favored selection of music playing in the background; a cowboy hat perched atop the head.
And so on.
Me, I can and do and have written things anywhere and everywhere. In airports and on airplanes, on the bus, alone in my office, at the kitchen table surrounded by family, in motel rooms, at all times of the day and night, in front of the TV, with a radio or music or nothing playing…. Well, you get the idea.
I also write in my sleep. Don’t ask me how it happens. But many (it would not be pushing it to say most) mornings, I wake up with a string of words stuck in my mind. If I went to bed with an advertising assignment pending, I would often awaken with an idea, a headline, and even a draft of the copy ready and waiting.
It happens with poetry, too. A couplet, a quatrain, a stanza, even the basis for an entire poem may greet me with the sun. Or dialogue—a whole conversation between characters—for a novel in progress. A way to say a passage, an opening or closing line. An idea for a character, a story, a detailed concept for a novel, the framework for an essay or magazine article.
Sometimes I even see it happen. In that not-quite-asleep-but-not-yet-awake time in the morning, ideas and words and phrases ricochet around in what passes for my brain and I just sort of lay there and snooze and watch as they turn into something useful.
That’s all for now. I’m going to bed. Maybe, come the morning, I’ll have more to say.

Browse any reader’s list of favorite Western novels and any one of several books by Elmer Kelton is likely to pop up pretty soon. The Day the Cowboys Quit. The Time it Never Rained. The “Lone Star Rising” trilogy. The Far Canyon. And on and on.
I have read many Kelton novels and enjoyed every one. Some so much that you’ll find them on my list of books to re-read and read again. While, at some level, comparisons become silly, The Good Old Boys is probably my favorite among favorite Elmer Kelton books.
For one thing, it’s lighthearted, even humorous at times. And, with a penchant for hyped-up action so common among Westerns, there aren’t nearly enough smiles in the genre. Beyond that, Hewey Calloway and Spring Renfro are people you’d like to know. So much so, in fact, you believe you do. They’re real right down to the core.
I had the pleasure to know Elmer Kelton. A finer, kinder, more considerate gentleman you’ll never know. While talking about writing one time I heard him say that he believed the opening line of The Good old Boys was the best he’d ever written. If it has slipped your mind, here it is:

For the last five or six days Hewey Calloway had realized he needed a bath.

He’s right. You can’t help but read on.

Posted by writer Rod Miller at 8:27 AM 6 comments: