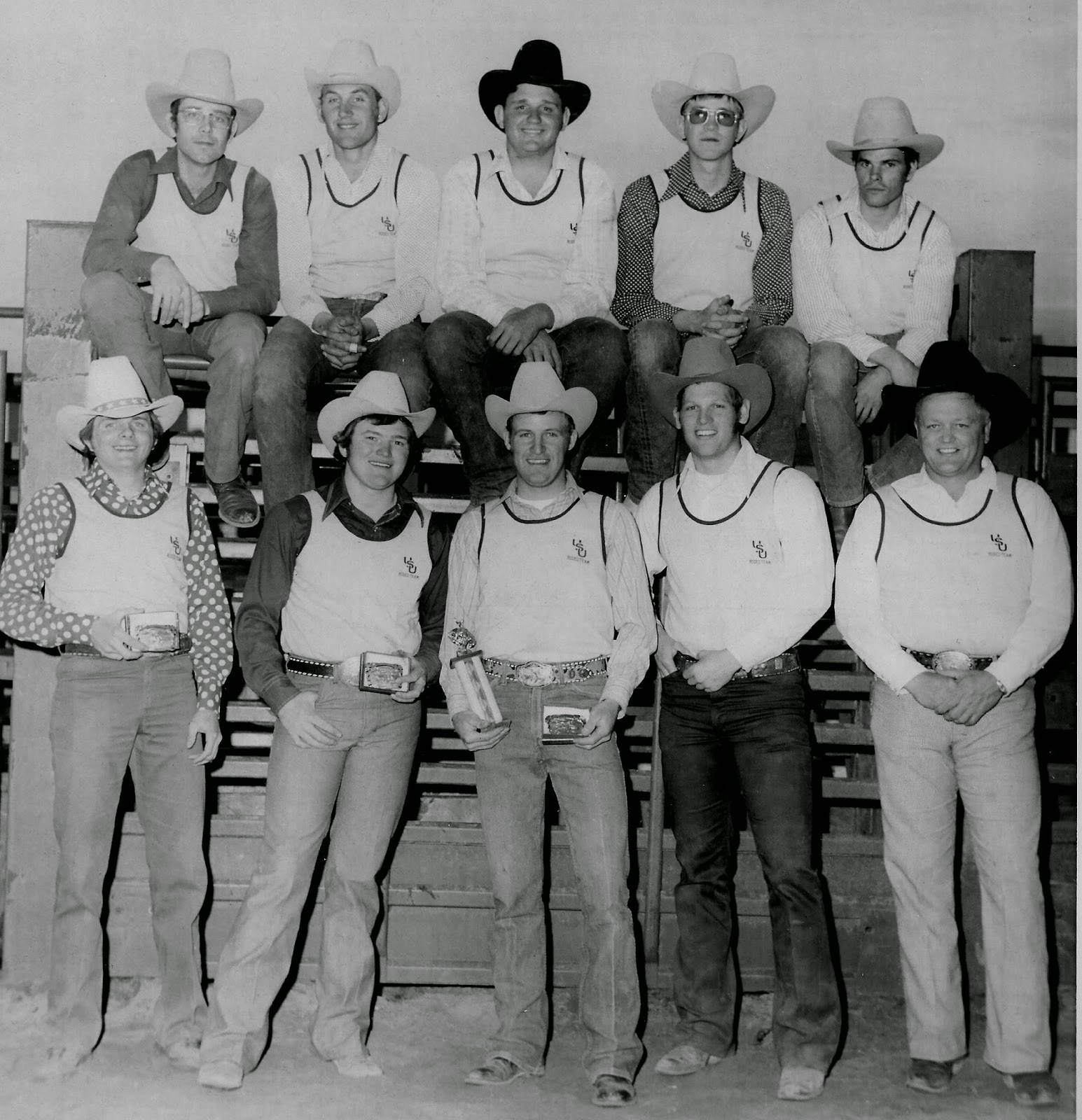 In the early 1970s, Canadian cowboy Bruce (we called him “Pink” back then) Hunt was a roommate and Utah State University Rodeo Teammate. In an uncommon pairing of roper and roughstock rider, we traveled a lot of miles together going to college and PRCA rodeos, ranging as far afield as Colorado and California. He was a hell of a lot better roper than I was a bareback rider, and that’s all I’ll say about that.
Bruce later married a cowgirl and settled down in Coalinga, California, as coach of the rodeo team at West Hills College, where his teams won a lot of championships over the years. After more than three decades, Bruce is retiring as rodeo coach. It’s a big loss, and a sad day for the school and the sport.
But now that he no longer holds an official position where he is expected to be a shining example to America’s youth, I am free to relate stories about some of the things he got up to when he was young….
On second thought, on the advice of counsel I will, instead, assert my Fifth Amendment right against self-incrimination. And that’s all I’ll say about that.

(The photo: USU Rodeo Team. That’s Bruce “Pink” Hunt, standing second from left. That’s me (they called me “Mini” back then) standing to the left of him in the stylish polka-dot shirt. We both won buckles at that rodeo.)
Posted by writer Rod Miller at 7:38 PM 2 comments:

The Branding Iron Award is a special honor bestowed by Western Writers of America “to the member who has provided exceptional support to the organization and its goals.” Among past recipients are Jim Crutchfield, Candy Moulton, and James Ersfeld.
While I am in no way fit to be in their company when it comes to service to WWA, the Executive Board, in a weak moment, decided to add my name to the list of Branding Iron Award winners. I am honored and surprised—make that amazed. They made the decision upon accepting my resignation as WWA Membership Chair, a position I had held for the past nine years. As the old saying goes, if I’d known they’d honor me like this for quitting, I’d have done it a long time ago.
At the WWA convention next week in Sacramento, I will get a genuine branding iron. If memory serves, it’s about the right size to heat to a cherry red glow and stamp a WWA logo on the side of a beagle pup.
But I think it’s meant to hang on the wall, so don’t light a fire or call the dogs.

Grand Openings: getting a book off to a good start. 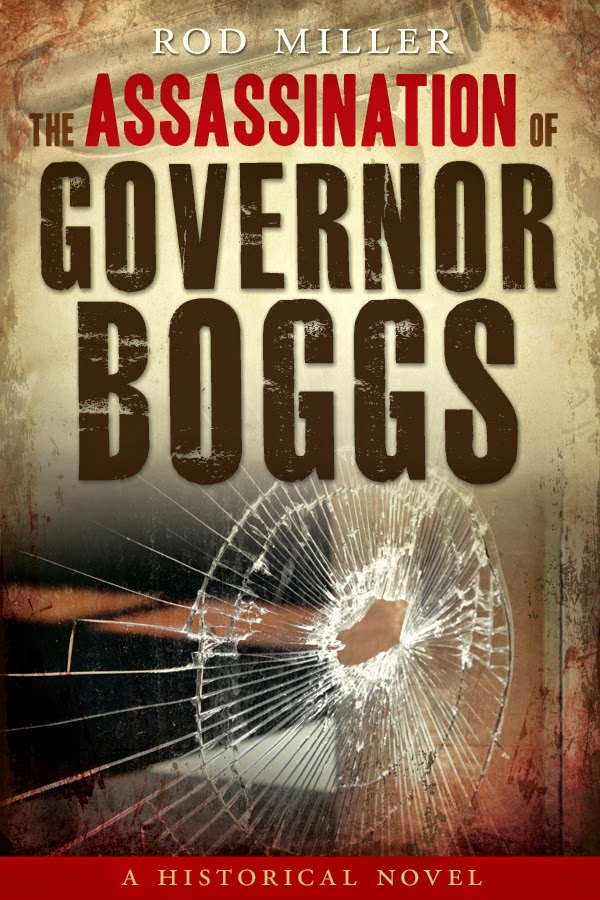 From time to time I am asked to speak at writers’ conferences and workshops. It’s always a good time to congregate with people who like to write (and read) and talk about how to do a better job of stringing letters into words and words into sentences and sentences into paragraphs and so on.
Among the many topics I have addressed in these appearances is “Grand Openings: How to get your book off to a good start.” In the presentation, we talk about techniques for writing effective opening lines for books and stories and such. We look at some outstanding opening lines from a variety of fiction and nonfiction books and examine what makes them work. It’s an interesting discussion, and most who have sat through it claim they learned something.
Here are a few examples of strong opening lines included in the lecture, some you may recognize and some you may not:

·         Call me Ishmael. (Herman Melville, Moby Dick)
·         It was a bright cold day in April, and the clocks were striking thirteen. (George Orwell, 1984)
·         We started dying before the snow, and like the snow, we continued to fall. (Louise Erdrich, Tracks)
·         He was dying faster than usual that morning, striping the sides of the dry sink with bloody sputum and shreds of shattered lung. (Loren Estleman, Bloody Season)
·         Beware thoughts that come in the night. (William Least Heat Moon, Blue Highways)
·         By the time Eustace Conway was seven years old, he could throw a knife accurately enough to nail a chipmunk to a tree. (Elizabeth Gilbert, The Last American Man)
·         This is the most beautiful place on earth. (Edward Abbey, Desert Solitaire)

And, all humility aside, I include the opening line from Chapter One of my novel The Assassination of Governor Boggs, which I think makes for a good start:

·         Lilburn Boggs was never the same after getting shot in the head.

There are several techniques employed in good opening lines, but I believe the most important is a carefully measured amount of ambiguity—just enough to engage and involve readers and all but force them to read on to fill the gap.
Effective (and affective) opening lines are important, I tell the audience, because if you grab a reader’s interest with the first sentence there’s a chance they’ll move on to the first paragraph, then the first page, the first chapter, and so on. But, if you don’t get them at the beginning, you’ll never get them to the end.

Posted by writer Rod Miller at 8:17 AM 6 comments: 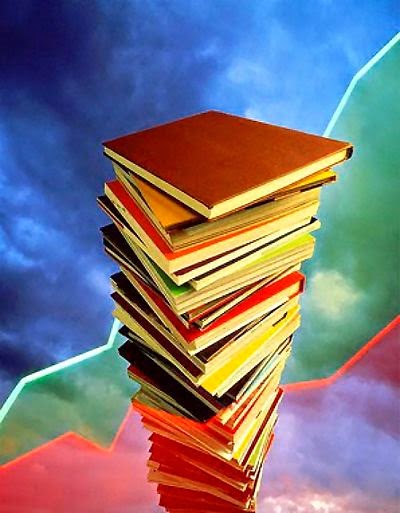 Reading, while among the most enjoyable of activities, is time consuming. I find myself reading a lot of books for reviews and literary competitions that I wouldn’t otherwise read, so when I read for pleasure, I like to make sure the time is well spent as well as enjoyable. And that means reading books that are more than worth the paper they’re printed on. Even when it’s “escapist” fiction, I still want a book to be well written.
Some authors have the ability to deliver every time. Here are a few that I read and re-read regularly:
Wallace Stegner. The “Dean of Western Writers” is equally adept at fiction and nonfiction. Big Rock Candy Mountain and Angle of Repose are excellent novels. Wolf Willow is in a class of its own, blending nonfiction and fiction, including the short story “Genesis,” which may be the best Western short story ever written. All of his books and stories are worth reading.
John McPhee. A long-time contributor to The New Yorker, McPhee has several collections of magazine pieces as well book-length treatments of a number of subjects. Some are set in the West, others elsewhere around America and the world. But no matter the subject, I grab up everything I can by McPhee as it is sure to be well written and engaging.
Wendell Berry. I read his essays. I read his poetry. I read his short stories. I read his novels. They are all outstanding. It is a wonder how this Kentucky farmer can write so much stuff with a pencil and a yellow pad—let alone write it so well.
James Galvin. His poems are often beyond me, but I like reading them. His novel, Fencing the Sky, is outstanding. The Meadow defies description and may well be the best book I have ever read (and re-read, and re-read…).
Cormac McCarthy. It seems people either love or hate McCarthy’s writing. Put me in the former category. While it’s unusual and takes a bit of effort, his prose paints pictures so vivid they burn themselves into your brain. And his way of sneaking up on a climactic scene is always surprising. Blood Meridian is haunting and unforgettable, his Border Trilogy (All the Pretty Horses, The Crossing, Cities of the Plain) is outstanding, and I like his other books as well.
John Steinbeck. What can I say? His novels made (and make) me love reading. Tortilla Flat, Of Mice and Men, The Red Pony, The Grapes of Wrath, East of Eden…. Steinbeck wrote about a different kind of West and changed people’s minds about what’s out here.
There are, of course, many other authors I enjoy. We’ll save them for another day. Meanwhile, who are some of your favorite authors?

Posted by writer Rod Miller at 6:32 AM 8 comments: