Once in a lifetime. 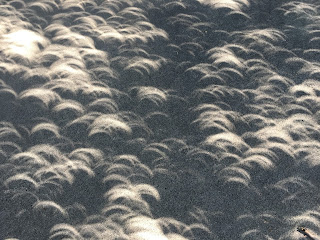 Here we go again—completely ignoring the joys of reading and writing to wander off into the trivia of life.
Sorry, I can’t resist.
On August 21, the good people of the good ol’ USA were treated to a coast-to-coast total eclipse of the sun. It doesn’t happen very often. For some of us, it will probably never happen again. So I thought I’d comment on the spectacle.
Where we live in Utah, 91% of the sun was obscured, leaving only a tiny crescent of the orb visible through our approved eclipse-viewing glasses. My wife and I sat on the driveway looking up from time to time for quite a spell.
But what we found most intriguing wasn’t in the sky—it was on the ground, at our feet.
Shading much of our driveway is a big (and messy) tree. Some kind of elm, we think. Where the sun peeked through the thick foliage, the tree created hundreds of “pinhole projectors” that cast the eclipsing sun on the concrete surface of the driveway. That’s what you’re seeing in the photo above—each of the many crescents is an image of the eclipsed sun.
We thought it was kind of neat, so we took a bunch of pictures of it. Later, on TV, one of the NASA experts mentioned the phenomenon. I doubt I’ll ever see it again.
Next time, it’s back to reading and writing. Unless, that is, some other strange and spectacular thing happens.

Warning: what follows is all about eating and has nothing to do with reading.
Often at mealtime, and at meal-planning time, I am accused of being a picky eater.
I disagree.
If you ask me, I’m just a man of simple tastes. I can’t help it. I was raised that way. The town I grew up in was so small we did not eat pasta there. We had macaroni. And we had noodles. But if someone would have said “pasta” we would not have had any clue what that person was talking about.
Bread was bread. It was usually homemade, sometimes store-bought, but always just plain old bread. Nothing “artisan” and no one ever served up a loaf sprinkled with stuff that looks like it came off the bottom of a bird cage. I see that sort of thing a lot now. But I don’t eat it.
Vegetables mostly came in in the form of potatoes, peas, beans, corn, and carrots. Salads were occasional and as often as not made with potatoes or macaroni rather than green things—and none of that green stuff was ever kale or arugula, to my knowledge. I only remember being served artichokes one time, and that was on a cattle ranch in Nevada. Which surprised me, and still does.
Meat was a staple. Because we raised it, it was always available. Roast beef and steaks and hamburger and soup bones. Pork chops and roasts and ham and bacon and side pork. Lamb (which I never cottoned to; same with goat) and deer meat. Lots of chickens (and eggs), fried. Nowadays I’ve narrowed my meat menu down to beef and pork, with chicken (yardbird, as my brother calls it) very rarely, still fried. As for other poultry, I get turkeyed out for the year about three days after Thanksgiving. Fish and seafood were pretty much unknown at our house, except the occasional “fish stick” or the rare trout we caught.
We seldom ate out when I was a kid. A trip to the hamburger stand when out shopping was about it. In fact, I thought it unusual that people would go out to eat for no particular reason.
At our house nowadays we eat food somebody else cooked quite often, and it’s usually just plain old food. I’m told it’s because I’m a picky eater. But, truth be told, I am simply not interested in strange cookbook foodstuffs that usually end in the letter “i” and hide under some kind of sauce, and where “plating” and “presentation” are more important than taste.

Another Rawhide Robinson cover up. 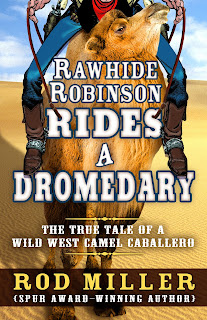 Five Star, publisher of my Rawhide Robinson novels, recently sent the cover for the next book featuring the adventures of the extraordinary ordinary cowboy. That’s it, up there.
The book is due for release in February and I am looking forward to seeing it in print. It is always exciting (and somewhat intimidating) to see something you’ve seen about a million times on your computer screen show up as a genuine, actual, ink-on-paper book.
Read a bit more about Rawhide Robinson Rides a Dromedary: The True Tale of a Wild West Camel Caballero (and the other Rawhide Robinson novels). And consider putting the first two in the collection on your Christmas list for readers from junior high through geriatrics who would enjoy tall tales, Old West adventures, and cowboy humor.
And save room on your book shelves for the next one, come February.


Posted by writer Rod Miller at 8:26 AM No comments: