The week that was, Part Two. 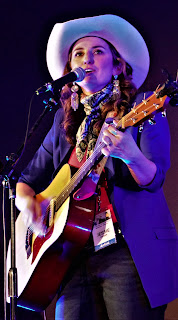 As noted in the previous post, the week that turned January into February was a busy one. The morning after attending anniversary ceremonies at the site of the Massacre at Bear River, we packed up and headed to Elko, Nevada, for the National Cowboy Poetry Gathering. Besides enjoying the poets and musicians from the audience, I was also gathering material for an upcoming feature story for Saddlebag Dispatches magazine.
The story focuses on the wide variety of cowboy music on offer at the Gathering, “cowboy music” being defined as any damn song a cowboy likes.
I had the opportunity to interview (or “sit down with,” in banal journalistic babble) several artists who write, compose, and/or perform music. That included Jessie Veeder (pictured), a North Dakota rancher who sings about the life with a contemporary twist; Andy Hedges, a songster who collects and sings old-time, traditional cowboy tunes; Dave Stamey, widely recognized as one of the best Western songwriters and performers on stage today; Geno Delafose and his French Rockin’ Boogie zydeco band from the Louisiana prairies; Denise Withnell of Canada’s Cowboy Celtic band that pays homage to the even-more-ancient roots of many old cowboy songs; Wylie Gustafson of Wylie and the Wild West—“wild” being the operative word; Montana poet, songwriter, and singer DW Groethe; and honey-voiced horsewoman Trinity Seely.
And that’s not even counting the many other artists I had neither time nor space to feature.
As you can imagine, the variety in the musical offerings at Elko, and everywhere else Western enthusiasts gather, is rich and varied—something and someone for every cowboy (whether cowboy in fact or in spirit) to enjoy.

Posted by writer Rod Miller at 7:55 AM 2 comments:

The week that was, Part One.

The week that turned January to February was a busy one around here. Or, not around here, as the case may be.
On January 29, we boarded a bus with a group from Utah Westerners and traveled north on the more-or-less same trail Colonel Patrick Edward Connor took with his cavalry troops in 1863 on a mission to seek out and destroy a Shoshoni winter camp—and the people there.
Every year, the Northwestern Band of the Shoshone Nation, descendants of the few survivors of the massacre, meet on the killing field to remember the fateful day. And they gracefully host all interested parties who care to join them. One newspaper report estimated this year’s crowd at 500. Larry Echohawk (pictured), former United States Assistant Secretary of the Interior for Indian Affairs, offered the keynote address.
I have written widely about the Massacre at Bear River, the latest effort being a novel based on the horrors of the day. When released in 2021, It will carry the same title as a song I wrote the lyrics for, “And the River Ran Red,” by the great Western singer Brenn Hill. Brenn was at the ceremony and, as he did last year, sang “And the River Ran Red.”
The Northwestern Band of the Shoshone Nation, under the direction of tribal chairman Darren Parry, is in the process of creating the Boa Ogoi Cultural Interpretive Center at the site. Your financial support will help. Donations of any size are welcome.
Thank you.

Posted by writer Rod Miller at 9:04 AM 3 comments:

Dispatches from the West. 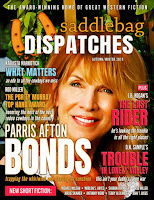 Saddlebag Dispatches has a new issue available. As always, it’s big and colorful and filled with all things Western. A few of the items in the magazine have my name at the top.
A new short story, “Black Joe,” is about a wild mustang stud and his clashes with a rancher. There’s a feature article about the PBR Ty Murray Top Hand Award, and the collaboration between Ty Murray and the designer and sculptor behind the award, Jeff Wolf. My rodeo poem about how the Star Spangled Banner affects bareback riders, “Long May It Wave,” is given a beautiful presentation. And, finally, my regular “Best of the West” column features what must be the oldest of the Old West’s best towns, Taos Pueblo.
If you don’t read Saddlebag Dispatches, you’re missing out on a fine publication, offering a lot of variety in its presentation of the American West, old and new. Follow the link and take a look.

Posted by writer Rod Miller at 7:44 AM 3 comments: