The whistle has sounded. 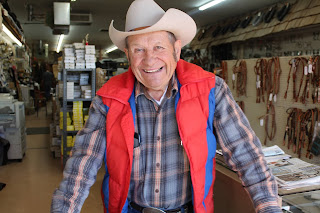 Bob Schild’s ride is over. He left us January 20. And, no matter what criteria you use for judging, Bob made the whistle on a winning ride.
The years found Bob in a variety of arenas. He was a rodeo cowboy of the first order, successful in all the rough stock events with numerous championships to his credit. He was a businessman, establishing and operating B-Bar-B Leather for decades, building and selling saddles, rodeo gear, and providing all manner of horse equipment; a business passed down to his sons. He was a poet, long before cowboy poetry became the thing to do.
When I first thought to pen poetry, I looked to Bob’s work for inspiration and an education. Beyond mere rhyming stories, Bob’s verse showed literary technique, deep thinking, and attention to craft. I wanted to meet him.
I tracked Bob down at the National Circuit Finals Rodeo one year, where I found him sweeping up under the grandstands. That’s the way Bob was—always willing to lend a hand and do any job that needed doing. He was happy to make my acquaintance and willing to talk poetry and rodeo anytime, any place.
We became friends, and for years engaged in a one-sided admiration society. I had little to contribute to the relationship. Bob gave it his all. I wish time and distance hadn’t gotten in the way of my spending more time with him.
A few magazine articles focusing on Bob found their way into print, and it was difficult for me as a writer to maintain any semblance of objectivity when writing about him.
I will never forget Bob Schild. Even though the whistle has sounded, his winning score is permanently inked in the record books. 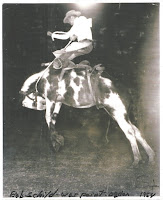 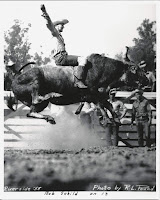 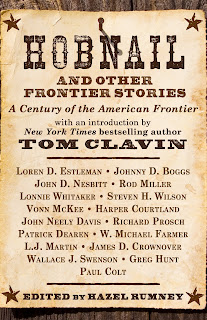 A “short story” has been defined as one that can be read in one sitting. That being the case, Hobnail and Other Frontier Stories, a new anthology from Five Star, is good for seventeen sittings.
Some of my favorite Western writers, including Loren D. Estleman, Johnny D. Boggs, and John D. Nesbitt are featured here. And there is a story by yours truly.
“The Times of a Sign” is about mules and jacks and horses and thievery, as it tells of a young man who takes part in a horse-stealing expedition to California, which leads to establishing a mule- and oxen-breeding operation in Missouri. As he explains to a questioner the absurdity of the sign advertising his enterprise, he relates the adventure of establishing the business.
The sign reads:
for sale
mules and oxen
breeding stock
What could possibly upset him so? One sitting with Hobnail and Other Frontier Stories will answer that question.

Posted by writer Rod Miller at 9:27 AM No comments:

As you know, American English is a rich language with enough words and phrases to tell about anything and everything. And yet, rather than just use words as they are meant to be used, we abuse them and misuse them. Usually, in feeble attempts to sound more important. But those efforts fool few of us, and are just plain stupid.
Then there are simple, ordinary, everyday words that get thrown into sentences where they serve no purpose whatsoever. “Different” comes to mind. It has a distinct, clear meaning to describe things that are not alike, or dissimilar, or, sometimes, unusual.
For example: “I talked to three people and got three different answers.” It is clear that each person’s account was unlike the others.
But I hear people say things like, “I talked to three different people,” or, “We visited six different states.” What purpose does “different” serve in those examples? Surely you couldn’t talk to three “same” people, or visit six “same” states.
On the other hand, considering the first example, you could talk to three people and get the same answer.
As far as I know, economy of language requires not wasting words by using them needlessly. Like “different.” You may have a different opinion.