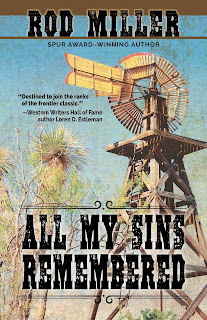 My latest novel, All My Sins Remembered, has been reviewed by readers a number of times, with generally positive comments for such a gritty, violent story. One review in particular examines the novel in depth and offers incisive analysis—well beyond what I, as the author, could offer. The reviewer is Charles E. Rankin, and he is widely experienced in reading, evaluating, editing, and publishing books about the American West. Mister Rankin is the retired Associate Director and Editor in Chief of University of Oklahoma Press; former Director of Publications, Montana Historical Society Press; and former Editor of Montana: The Magazine of Western History.

Here's what he has to say about All My Sins Remembered:

It is not by chance that, in his latest novel, Rod Miller has taken his title, All My Sins Remembered, from Shakespeare’s Hamlet. Comparable to the Bard and to Cormac McCarthy, this book is about madness. It is also about good and evil in contention, and the road this story travels leads to both. The protagonist—an unnamed roadhouse operator—extorts, murders, and robs from those who have things he wants or who anger him or who become innocent victims of his haunted dreams. Yet he also bestows unprovoked kindness, seemingly without recompense, to those most in need. Others, he leaves alone. Like Hamlet, he dreams, his dreams bring further madness, and they lead to his undoing.

The story takes place at a roadhouse, a western-styled Bates Motel. It sits somewhere in the desert along a dusty road that leads to California and its dreams of renewal in one direction and to some far off, nondescript valley settlements in another. A mining camp that vacillates between lingering death and renaissance is located somewhere not too far up the road, and an impoverished Paiute band ekes out existence somewhere in the surrounding hills and canyons.

At the roadhouse is a windmill and a well. Together, they constitute the story’s fulcrum. The windmill furnishes life-giving water aplenty but at a cost. The well, made unproductive by the windmill, is a sepulcher. It smells like death, as well it should. Many bodies lie at its bottom. For the life-giving water from the windmill, the roadhouse operator charges exorbitantly. All travelers protest the unconscionable cost, but almost all pay it. They are often invited in for a meal, cooked by a Paiute woman who lives slave-like at the roadhouse. If travelers come in to eat, they are directed first to a bowl with water and a towel, but no soap. Soap is for sale, but only one traveler—the photographer—buys it. He will trade images for its cost. Otherwise, the travelers’ hands, like their sins, remain unwashed.

The protagonist controls both the windmill and the well. He is an evil, violent man who commits eleven murders on stage and is undoubtedly guilty of others. The Indian woman who lives with him is silent. He likely cut out her tongue, but we never find out for sure. She is not without heart, however. She is kind to those who deserve it, especially women.

Despite remoteness, many wayfarers arrive at the roadhouse. The cast is as diverse as those in Bret Harte’s Outcasts of Poker Flat. But only two besides the protagonist are particularly important: the Paiute woman and a mail carrier who travels the road every few days on his way from valley towns to mining camp and back again. Both are symbolic. The Paiute woman, like so many Indian people in American history, has no voice. But she perseveres. Often abused and beaten terribly, she is a survivor. The man who carries the mail is a Shane-like character. He functions as fate, conscience, justice, the means to resolution. Like Shane, however, he cannot remain and must ride off into the sunset at the end.

The story is told in the first person from the viewpoint of the roadhouse operator so, like it or not, we come to identify with him. At times, he is a sympathetic character. He does not murder everyone who comes to his roadhouse. In fact, he gives kindly aid to two Mormon missionaries who make him think on religion, to three destitute children who win his father-like sympathy, and to two families so honest, yet so pathetically down on their luck, they gain his help. Other vignettes are equally curious: the three ladies of the night who barter their pleasures for his exorbitant charges; the photographer who does similarly but trades knowledge and photographs of the roadhouse grounds, including the windmill and the well, for what he owes; and the freighter who brings him much desired vegetables and foodstuffs.

The story almost seems Manichean, but it is too complex for that easy interpretation. Rather, as with Shakespeare’s Hamlet, dreams haunt the protagonist’s sleep. Interludes of flashbacks indicate a violent past not of his doing. So, we are not without sympathy, but we are morbidly intrigued. Like a disaster unfolding in real time, we cannot look away.

It is a cliché, but this is the kind of book you cannot put down. It is lean; Rod Miller does not waste words. Yet the story abounds with detail—about food and cooking, about how liquor coats a glass, about how people look—and don’t look—at each other, about how wagons are pieced together and taken apart, about how horses and mules are constituted and act, about telling silences amid edgy conversations. Told with such verve and knowing detail, the story brings characters without names and distinct faces clearly to life. The action is swift, the western scene spare and tense, the whole, as Loren Estleman says, remarkable in its historical accuracy and stunning in its immediacy.

Posted by writer Rod Miller at 8:18 AM No comments: