Along the Old Spanish Trail. 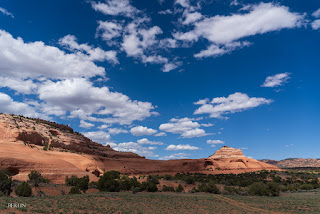 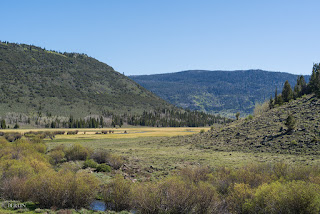 There’s a well-known saying about the Old Spanish Trail: it isn’t old, and it isn’t Spanish. But from 1829 until 1848, more or less, it was an important trade route linking Santa Fe to Los Angeles. Mexican traders (and others) loaded strings of pack mules with woolen goods in New Mexico, trailed them to California, and traded for horses and mules. The animals—many thousands of them—were trailed back to New Mexico then sold on to Missouri, Old Mexico, and other markets. Thieves also raided California ranches for horses and mules for the same purpose, as well as selling them to the U.S. Army for use in the Mexican-American war. Traders in Indian slaves used parts of the route as well.
Not long ago, I had the privilege of exploring the Old Spanish Trail through Utah with the Utah Westerners. Through slickrock and sagebrush, deserts and mountains, sand and shadscale, we followed the route as nearly as possible, almost from border to border. Along the way, we were guided and educated by well-informed local historians as well as members of the Westerners.
The Utah Westerners set off on such a field trip every summer, but this was my first with the group of historians and history buffs. It will not be my last.

(Thanks to Utah Westerner Steve Berlin for the photos.)

A River Runs Through It is a small book. Something over 100 pages in most editions. And it’s the only “book” Norman Maclean ever wrote. (There is a published but unfinished nonfiction book about the Mann Gulch Fire, Young Men and Fire, and a few long short stories, published with A River Runs Through It in some editions.)
On the surface, A River Runs Through It is a story about fly fishing on Montana rivers. I am not interested in fly fishing. What the book is really about is love—not romantic love, but the love among a father and a mother and their two sons, with a tiny bit of romance thrown in for good measure. It contains elements of some old stories. There are hints of Cain and Abel, Isaac and Ishmael, and the story of the Prodigal Son.
Unlike many books, but like many of my favorite books, there’s a lot of ambiguity in its pages. You have to pay attention. And it doesn’t end in what many readers would consider a satisfactory way.
Again, there’s some ambiguity there.
Maclean doesn’t provide many answers, but he does deliver a lot of questions. And that means the story stays with you long after you close the book. So much so that, like me, you’ll be inclined to open it again (and again) sometime to see what kinds of questions it asks this time.

Post-game interview with a writer.

We’ve all heard athletes face the microphones after a game. What if writers had to do the same after a day at the keyboard?

Question: What have you got to say for yourself after today’s performance?

Answer: Needless to say, it wasn’t the kind of showing we hoped for. We hoped for a better result. It just didn’t happen for us this time, and that’s the way it goes sometimes. So, we have to put it behind us and move on. There will always be ups and downs in this game.
As writers, we face adversity every day. We just have to step up and show what we’re made of; show some character. Establish our identity and show what kind of writers we want to be.
It’s important to remember that this is a marathon, not a sprint. It’s a long season, and it’s not over until we type that last period at the end of the last page. We just have to keep at it, one letter at a time. Do our part to get the next word right, the next sentence, and not worry too much about what the next chapter might bring.
We have to concentrate on the things we can control, and not dwell in the past. We have to brush off that split infinitive, forget that dangling participle, and get back out there and write. As you know, it’s a simple matter of putting in the kind of work it’s going to take if we want to control our own destiny. 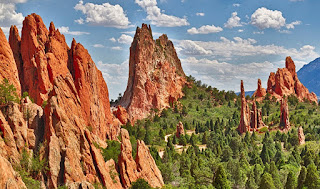 Colorado Springs, Colorado is 6,035 feet above sea level. As cities in the United State go, it’s pretty high. (No jokes about the state’s marijuana laws, please.) Being invited there to teach workshops at the Pikes Peak Writers Conference should qualify as higher education.
I was there recently doing just that and enjoyed the visit and the conference.
It’s a big event, with somewhere near 400 writers attending to improve their craft. There are five sessions underway at any given time, with a total of 75 workshops over the course of two-and-a-half days of the conference, not counting preliminary events and other offerings.
At 6,035 feet, the air is pretty thin in Colorado Springs. But writers are thick during the Pikes Peak Writers Conference. It was good to be there and share ideas with some of them.

P.S. The photo above is Garden of the Gods, a beautiful park tucked between the city and the mountains. Well worth a visit.

Posted by writer Rod Miller at 7:32 AM 3 comments: