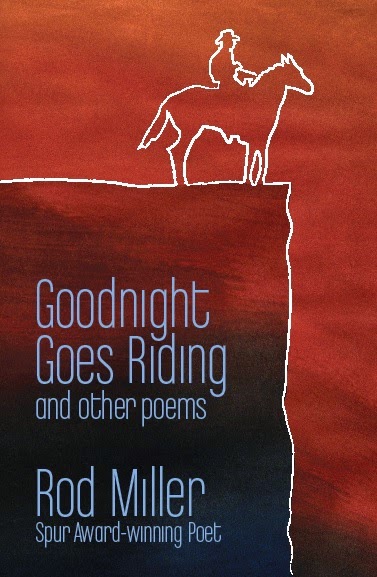 Haiku is a poetic form originated in Japan which has been adapted for use by poets who write in English and harbor a desire to drive themselves crazy.
The form requires three lines, the first and last holding five syllables, the middle seven. Seventeen syllables in all.
Usually there is an allusion to nature, and a break of some sort that draws attention to a comparison of two images. (See what I mean about driving yourself crazy?)
But not always. Poets tend to go their own way, and adapt poetic forms (like haiku) to suit themselves.
The fun with haiku, I think, is trying to say something without really coming right out and saying it, and to layer as much meaning into the words as possible. And, for me, ambiguity is often an interesting tool (which can drive readers crazy).
Haiku are usually untitled, but I like to use a title of sorts. It can add to the fun. Here’s one I wrote called “Haiku for Hunger”:

Tomorrow lies in
the curve of a woman’s breast
in moonshadow glow.

I think it paints a vivid picture, but there’s the question: What’s it all about?
Maybe it’s about the hunger of a baby, and the image is of a mother sitting in a rocker by the window in the night, breastfeeding a baby which represents the future.
Or it could be the hunger is desire, and the picture it paints is of a man admiring his sleeping wife and contemplating waking her up for some marital bliss to strengthen the future of the relationship (he’s obviously dreaming—or crazy), or hoping to add to the family at some future date nine months hence.
Then again, it could be a fretful insomniac woman up all night worrying what the future holds, wishing she’d covered her filmy nighty with a warm robe.
Or perhaps it’s something else altogether.
But, in the end, it’s only seventeen syllables.
“Haiku for Hunger” is one of a handful of haiku verses in my new collection of Western and cowboy poetry, Goodnight Goes Riding and Other Poems. There’s nothing overtly Western or cowboy about the poem, but I like it and wanted it in the book.
Besides, it could be the woman in question lives on a ranch. I’ll go with that.
The book is due out around July from Pen-L Publishing (www.pen-l.com) . Watch for it. I will be.

Posted by writer Rod Miller at 7:08 AM 6 comments: 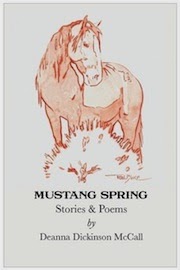 Cattle ranching is bred in the bone of author Deanna Dickinson McCall, having spent her life living and working on isolated ranches around the West, often without modern conveniences.
The stories and poems in Mustang Spring do not create or perpetuate the romantic mythology of ranch life; instead, we get unflinching portraits of hardship and hard work, and determined people battling the elements and, sometimes, other people. But the stories and poems are also infused with hope and optimism, qualities inherent in those who struggle to make a living off the land.
Written with clarity and creativity, this book makes an outstanding contribution to Western literature.

Posted by writer Rod Miller at 6:50 AM 2 comments: 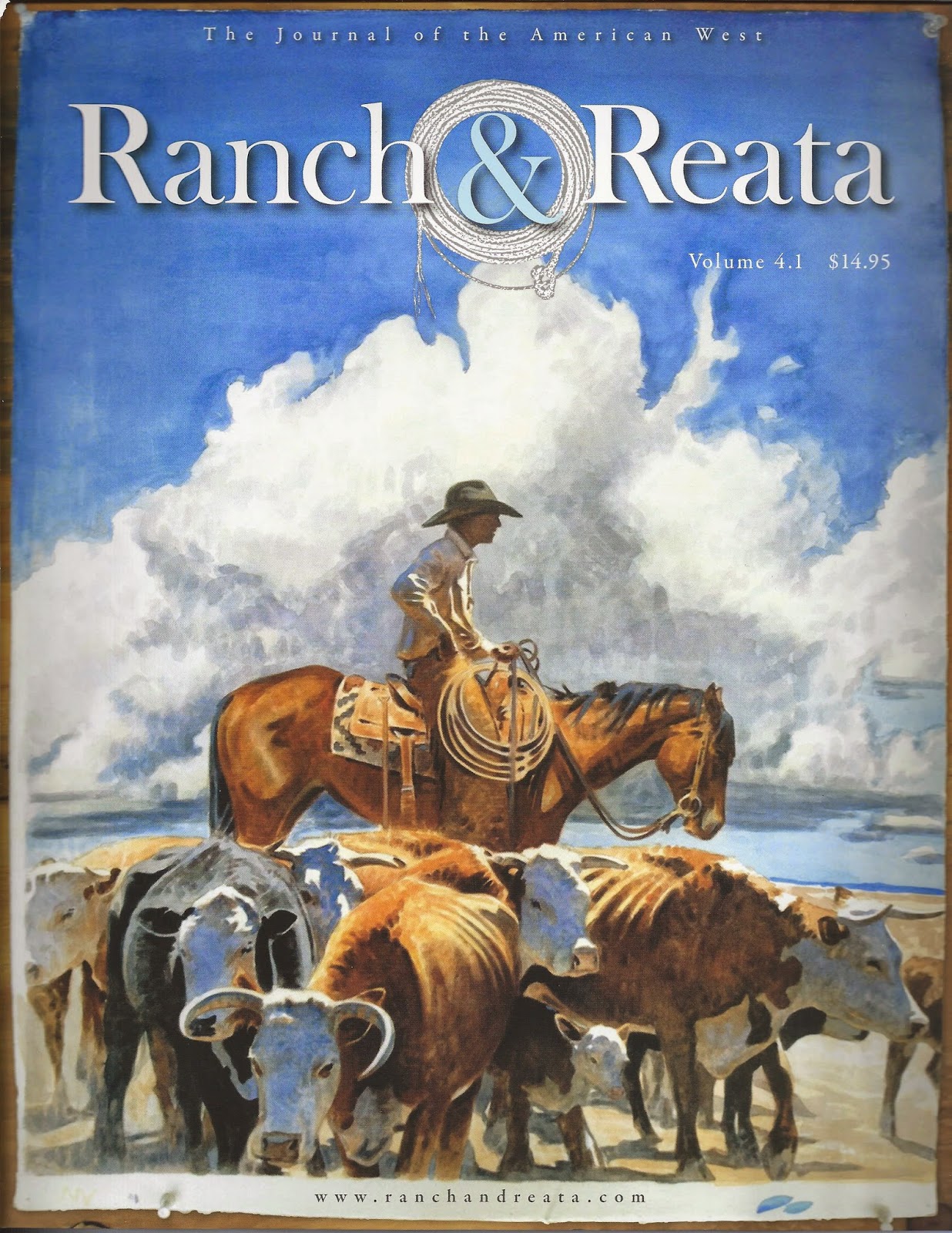 The April-May issue of Ranch & Reata magazine is 136 pages of photos and stories (and, of course, advertising) of interest to anyone who’s interested in the American West. Included in those pages are two stories I had the opportunity to write.
“Thinking Up Stuff” profiles author Johnny D. Boggs. Boggs, in my opinion (and in the opinion of many others), has written some of the finest Western novels on the shelf. He has already won more prestigious awards for his work than any other living Western author, and will, no doubt, win many more. Besides that, he’s a nice guy.
Paige Hadlock is the subject of the other story, “Paige Two.” This young horsewoman has won a bunch of championships in cow cutting, including top honors from the National High School Rodeo Association. Then there’s the flip side. She’s not only accomplished on the back of a horse, she shines hanging upside down, wrapped around the neck, leaping from side to side, and all manner of other positions where her fancy tricks take her. She’s been a featured trick rider at a number of shows and rodeos around the West.
Learn more about Ranch & Reata at www.ranchandreata.com.

I confess to being something of a Luddite. When I see a technological innovation that will help me do something I already do easier or more efficiently or better, I will grab onto it. But I am not one who grabs every new thing that comes along only to spend a lot of time looking for something to do with it.
And so it was with some amusement that I read some time ago about a fancy new “writing tool” for your computer that has so many “powerful” gizmos and gadgets it practically writes books all by itself. Like many things related to computers, the people pushing it (or justifying their use of it) fall all over themselves with praise almost to the same extent they trip the rest of us up with jargon like “feature-rich” and “robust.”
Wow. What is it that makes us want to turn a simple job like writing (at least in terms of getting the words down) into something so complicated?
Somehow, mankind has managed to write for far longer than we can remember, beginning with scratching characters in clay (a method which still works, should we care to employ it, whereas today’s fancy “writing tools” will likely be obsolete long before you are). Today, with the English language, writing is really nothing more than wrangling the 26 little letters of our alphabet and a few punctuation marks. That’s all. It’s as simple—and difficult—as that.
The thing is, paying attention to what those letters say on the page is infinitely more important than how we get them there.
I am certainly no expert at writing. But I know, and know about, lots of writers of great accomplishment; some are authors of dozens, scores, even hundreds of books. And few, if any, of them seem to worry much about the process of writing.
Instead, they worry about the result.
Most seem content with ordinary word processing programs, which, nowadays, means Microsoft Word more often than not. But I have a good friend from up the road, Michael Zimmer, who writes top-notch, intricately plotted novels about Western America using that old swaybacked workhorse, Word Perfect. Paul Zarzyski, a lauded poet, writes his poems on a used, manual, baby-blue portable typewriter he’s used since his college days. Loren Estleman, whose garage is brimming with literary awards for his many mystery and Western novels, likewise writes them all on a manual typewriter. Then there’s Wendell Berry, whose numerous books, from poetry to novels to essays to nonfiction, were and are written in longhand, with a number two pencil, on a yellow notepad.
And so on.
Twenty-six letters. That’s all it takes. You can either arrange them well, or you can’t. If you can, you’re a writer. If you’re not, all the fancy tools in the world won’t make you one.
Posted by writer Rod Miller at 4:35 PM 10 comments:

The past is messy. Although we like to think the world is black and white, that everything that happens is the result of a direct cause-and-effect relationship, and that only bad people do bad things, history is not that simple.
Further complicating our already complicated attempts to understand what happened way back when (or even recently) is the interpretation of events through biased accounts. Records are limited at best, often unreliable, and seldom objective.
Then our individual biases enter the picture: the notion that, somehow, the people we choose to cheer for, be they pioneers or cowboys or soldiers or Indians or whoever, were altogether noble and brave and heroic. Our heroes could not possibly do anything nefarious or underhanded, and any unpleasant incidents they found themselves involved in were not their fault.
Unfortunately, the real world, then and now, is altogether different. All people—all people—carry with them the capacity to be both good and bad, and most do their share of both. Ignoring this reality results in simplistic, one-sided representations of history in both fact and fiction, from novels with a Roy Rogers view of the Old West to accounts that are purportedly nonfiction but painted with prejudice.
Writers and readers are capable of, and deserve, better. As writers, we must set aside our biases and dig deep to understand people and events in the past and give our readers more authentic, realistic stories. In other words, we should tell, and listen to, the truth.
To paraphrase a bit of wisdom I heard somewhere, we must be humble in the face of facts. We must accept history as it is, rather than—as we are prone to do—believe what we think happened, or what we hope happened, or, even, what we wish had happened.
All this is on my mind just now as I am in the middle of writing a book of history, each chapter of which covers an important, but somewhat obscure, incident in the history of the West. Lost Frontier–Momentous Moments in the Old West You May Not Have Heard Of will be published sometime in 2015 by Two Dot/Globe Pequot. I hope it sheds light on some relatively unknown aspects of history—and does so honestly.

Posted by writer Rod Miller at 7:12 AM 8 comments: