There’s a common belief about Western novels, practically a law, that the hero always saves the day and good always triumphs over evil. And, truth be told, that’s the formula behind most, almost all, Western novels.
But there are books that defy the doctrine and go a different way, presenting a more nuanced—you could say more realistic—way of seeing things. Some of them become classics.
One such is The Ox-Bow Incident by the late Nevada writer Walter Van Tilburg Clark. There is no hero in its pages, the day is not saved, and there is no triumph of good over evil—just the opposite, in fact. And yet upon publication in 1940 the novel achieved eminence, and has maintained its place among the best Western novels of all time, widely considered a masterpiece.
It just goes to show, I suppose, that while there is safety for Western writers and Western novels in following the herd, there is more than one trail that leads to success.
And, to my way of thinking, to better books. 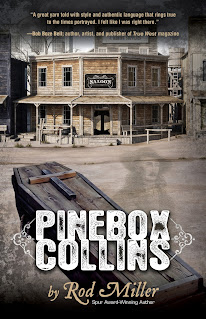 Regular readers here may have already heard of my most recent novel, Pinebox Collins. Perhaps not. The book was released just as we were all falling into the coronavirus and COVID-19 abyss, so it sort of got lost. In a word, it’s a story told by an itinerant one-legged undertaker in the Old West. Not long ago, I came across a review of the novel in the New York Journal of Books that I had not seen before. Here’s some of what the reviewer, Carolyn Haley (who I do not know), had to say:

“It’s all presented in a relaxed, steady style that melds what we think we know about the Old     West with what it actually was like….
[T]he story belongs to Pinebox, whose character and trade we also get to learn about through subtly sketched detail. His voice is laconic, erudite, wryly humorous, and feels true to the period. He salts his narrative with colorful one-liners, such as ‘Abilene had grown like a litter of pigs’ and a saloon with ‘empty tables as rare as hair on a billiard ball….’
Rod Miller’s skills and knowledge, combined with a natural storyteller’s knack, make Pinebox Collins both a great introduction to the genre and an enlightening addition to it."

Some writers say they never read reviews of their books. I read this one. You can too, right here: https://www.nyjournalofbooks.com/book-review/pinebox-collins.

Posted by writer Rod Miller at 9:38 AM 2 comments:

For several years now there has been a tendency among us, when bereft of any logical argument against an opposing point of view, to sniff in derision and make a weak-kneed accusation of “political correctness.” It’s easy to do and allows us to simply—and thoughtlessly—dismiss people and ideas we disagree with.
When I was a young man (or old boy), I tended to run in packs that were (as we put it) rude, crude, and unabashed. And, in some sick way, we were amused by it. We poked oafish fun and made mean jokes based on race, ethnicity, physical appearance, religion, sexual orientation, employment, politics, ideas, points of view, or anything else we thought might get a laugh—no matter how cruel or heartless.
In hindsight, it wasn’t funny. Even then. And though it took too many years to outgrow those ways of thinking, I like to think they are behind me. I hope so.
A common defense, usually heard just prior to an accusation of “political correctness” is that “those people” are just thin-skinned and too easily offended.
Well.
I do not get to decide what offends you or anyone else. Likewise, it is not up to you to decide what I or anybody else finds offensive. Or cruel. Or hurtful.
It seems to me that anyone who claims to be guided by any kind of moral compass would make every effort to avoid causing pain to others. To, as the old saying goes, treat others the way we would like to be treated.
Then again, such thinking may be nothing more than “political correctness.”

Posted by writer Rod Miller at 11:27 AM No comments: