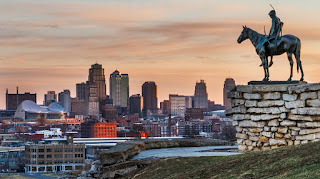 That title—a stolen line from a classic song—isn’t true, but it is more melodious than the factual “Kansas City, there we’ve been.” Last week was the annual Western Writers of America convention, held, as you have probably guessed, in Kansas City.
Always a high point in the year, the WWA convention gives me the chance to learn a few new things, meet a few new writers, and, best of all, spend some time with writers I’ve met at earlier conventions and who have become friends. I find that hanging around with people who are smarter than I am (they are not hard to find) is always stimulating.
The only downside to the convention is that the family members who travel with me get to spend their days seeing all manner of interesting places and things while I am at meetings. But I do get to tuck in a few such visits now and then and see things I’ve never seen before—like the Arabia Steamboat Museum, home to 200 tons of artifacts recovered from a steamboat that sank in 1856 and was recovered 132 years later from deep under a cornfield. More about that another day.
Next summer, WWA convenes in Billings, Montana. I’ve been there for one reason or another several times over the years, and am already looking forward to returning to Big Sky Country.

Lies They Tell Writers, Part 39: Believe in yourself.

People who attempt to write a book (or a short story, magazine article, movie, poem, or song) harbor the belief that they can pull it off. They’ve convinced themselves they can spend the requisite time in a chair, are confident they can string together the necessary number of words, and trust they can slog through the revisions and rewrites required.
Believing in yourself is a good thing. An essential thing. Without that belief, no word would ever get written.
But believing in yourself is only half the story.
If that.
It is equally important, perhaps more important, that you doubt yourself.
I think that bears repeating: If you want to be a writer, you must doubt yourself.
You must question every word. Is it the best word? Would another word say it better?
Would a metaphor, a simile, an allusion, or other indirect way of telling something work better than saying it straight out?
Is that the way this character would say that? Do you really think that character would do this?
And so on.
Writing—at least writing well—is a continuous process of self-doubt. And that’s just as important—if not more so—than believing in yourself.

Posted by writer Rod Miller at 7:17 AM 4 comments:

Rawhide Robinson, the ordinary cowboy who finds himself involved in all manner of extraordinary events, now has his own web site.
Visit www.RawhideRobinson.com and you’ll learn about the Wild West’s wildest cowboy. You can watch (in a matter of seconds) short videos about the books Rawhide Robinson Rides the Range: True Adventures of Bravery and Daring in the Wild West (winner of a Western Writers of America Spur Award) and Rawhide Robinson Rides the Tabby Trail: The True Tale of a Wild West CATastrophe (winner of a Western Fictioneers Peacemaker Award and finalist for a Spur Award). And you can read brief excerpts from those books as well as Rawhide Robinson Rides a Dromedary: The True Tale of a Wild West Camel Caballero, slated for release in February, 2018.
There’s no other cowboy quite like Rawhide Robinson. Pay him a visit online at www.RawhideRobinson.com. And, of course, you can get to know him better by buying the books. They make fine entertainment for readers from junior high to geriatrics.
(If I do say so myself.)