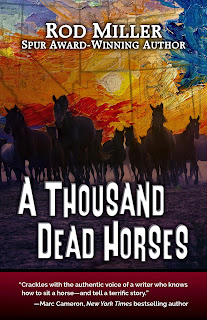 After being bedridden for six months because of the coronavirus pandemic, A Thousand Dead Horses is finally on the market.
By happenstance, like Pinebox Collins, the novel that precedes it, it features a main character with a wooden leg. But I had no choice this time. The book is based on a historic horse-stealing expedition from the 1840s, and one of the primary perpetrators of that adventure was famed mountain man Thomas L. “Pegleg” Smith. Honest.
Besides Pegleg Smith, the story features other characters from history including mountain men “Old Bill” Williams and James Beckwourth, and Ute leader Wakara. The horses and mules they stole are real, too—but I don’t know their names.
Marc Cameron, New York Times bestselling author of the Jericho Quinn political thrillers, the Arliss Cutter crime novels, and several of the Tom Clancy Jack Ryan novels, says, “A Thousand Dead Horses crackles with the authentic voice of a writer who knows how to sit a horse—and tell a terrific story. Fire embers snap, saddle leather groans—and the richly drawn characters pull you along with them on their adventure.”
The story, based on history from the Old West, will take you from Santa Fe to California and back again on the Old Spanish Trail.
Ride along.

Posted by writer Rod Miller at 9:41 AM No comments: 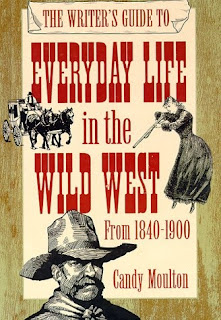 The Writer’s Guide to Everyday Life in the Wild West, from 1840-1900 by Candy Moulton is not the kind of book where you start at the beginning and keep turning pages until you reach the end. Not at all. It is a reference work; as the title indicates, a guide for writers.
But don’t let that discourage you. While I do use it for reference in my writing, and have done so for years, I also read the book for enjoyment. From time to time I will lift it off the shelf where it lives beside my desk and open it at random. No matter where I land, I will find interesting facts about how folks used to live, whether at home or at work or on the trail.
Where else would you learn, for instance, that Doc Holliday charged three dollars to pull a tooth? Or the ins-and-outs of two-story outhouses? Or that it took 700 pounds of bacon to get a family of four across the plains? Or the use of “Nebraska Marble” in home construction?
Every page is peppered with tidbits of the sort—information that is engaging to contemplate, interesting to learn, and fun to know.
So, whether you are a writer or not, this is a book you should own. After all, who knows when an occasion may arise over dinner or drinks to point out that the song “Dinah Had a Wooden Leg” was a big hit among cowboys in the Wild West.

Posted by writer Rod Miller at 12:41 PM No comments: 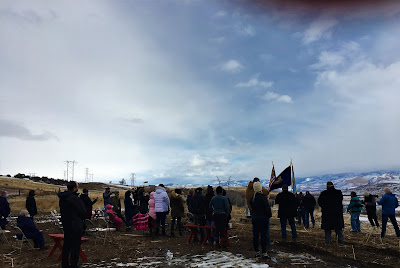 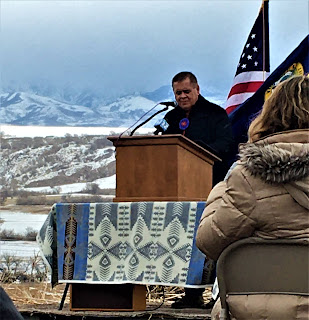 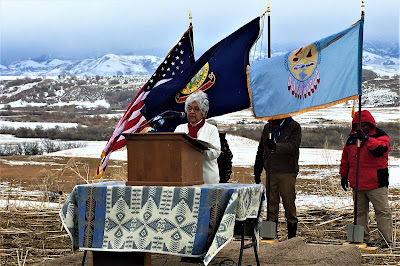 As regular readers know, January 29, 1863 is the date of the Massacre at Bear River, during which US Army soldiers slaughtered hundreds of Shoshoni Indians, many of them old people, women, and children. It was the deadliest massacre of Indians by the military in the history of the West.
For many years, members of the Northwestern Band of the Shoshone Nation have met at the site to commemorate the lives and deaths of their ancestors, who were nearly wiped out in the massacre. The public is graciously hosted at the ceremonies.
This year, 2021, things were different.
Owing to the Covid pandemic, the affair was smaller in scale, with formal invitations extended only to members of the Band. Some interested parties, including yours truly, drove to the site to honor the day in whatever way was possible. We were welcomed.
But, more important, for the first time the ceremonies were held in a new location—on bluffs above the river bottom on land owned—for the first time in 158 years—by the Band, and near where the Boa Ogoi Cultural Interpretive Center is taking shape. (Boa Ogoi means Big River in Shoshoni, and is the traditional name for the Bear River.)
Pictured is the relatively small but caring crowd at the commemoration; former tribal chairman and main force behind the Interpretive Center, Darren Parry; and tribal elder Gwen Timbimboo Davis. Both Parry and Davis are descendants of Sagwitch Timbimboo, tribal leader who was wounded at but survived the Massacre, and held the remnants of the band together in the aftermath.
Donations toward the development of the Boa Ogoi Cultural Interpretive Center are welcome, and certainly a worthwhile expenditure for lovers of Western History who recognize the importance of remembering even its darkest days.

Posted by writer Rod Miller at 7:27 AM No comments: