SANDY, UTAH: Work proceeds apace at writer Rod Miller’s desk. The author recently shipped With a Kiss I Die off to Five Star Publishing. The novel follows the star-crossed love story of a young emigrant girl from Arkansas and a Mormon boy from Utah Territory, and events leading up to the historic Mountain Meadows Massacre. Given publishing schedules, the book is not expected to see the light until 2023.

In other news, Five Star Publishing recently completed the cover design for the writer’s forthcoming release, And the River Ran Red. This novel is also based on Western history and tells the story of the Massacre at Bear River, the deadliest slaughter of American Indians by the US Army in the history of the West.

But not all the writing news is related to tragic historic massacres. Miller just finished proofing page galleys for the paperback and ebook release of the hilarious Western Fictioneers Peacemaker Award-winning and Western Writers of America Spur Award finalist novel, Rawhide Robinson Rides the Tabby Trail: The True Tale of a Wild West CATastrophe, soon to be released by Speaking Volumes. That publisher also revealed the cover design for Rawhide Robinson Rides a Dromedary: The True Tale of a Wild West Camel Caballero, a finalist for the WWA Spur and Western Fictioneers Peacemaker awards. Both comic novels should hit the shelves, physical and digital, any day now.

On schedule for release in early 2022 from Five Star is a novel by Miller that has already been labeled a “frontier classic,” All My Sins Remembered. Finally—for now—This Thy Brother, a sequel to his 2018 Peacemaker finalist, Father unto Many Sons, is expected for release by Five Star in the fall of 2022.

Read all about writer Rod Miller’s fiction, history, poetry, and magazine work at www.writerRodMiller.com and www.RawhideRobinson.com.

Posted by writer Rod Miller at 7:44 AM No comments: 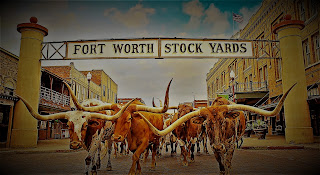 Over the years I have been to Fort Worth, Texas, a few times. But not enough. Other than a two-day stay for the big rodeo there, my forays into Fort Worth have been a couple of hours here and there while in the area on other business.
And my last visit, whenever it was, was a long time ago. So I’m ready to go back.
Fort Worth is a big city. But it’s a city—unlike many others I could name—that has never tried to outgrow its past as a cowtown. It takes pride in its past, and much of what I want to see and do there celebrates that past and Western heritage in general.
I saw a lot of great Charlie Russell paintings at the Sid Richardson Museum and will make a return visit. Then there’s the Amon Carter Museum I have heard good things about. And the National Cowgirl Museum and Texas Cowboy Hall of Fame.
And, of course, the Fort Worth Stockyards and all its attractions—even though it’s a bit touristy for my taste.
There might even be time to find something good to eat.