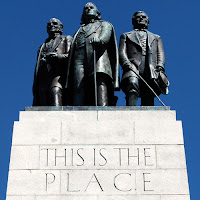 Today, as I post this, is July 24. Here in Utah it’s a big day. Pioneer Day. A state holiday. Lots of folks who work for a living get the day off. There’s a big parade in downtown Salt Lake City and fireworks will light up the sky tonight at many places around the state.
For some reason, Utah’s Pioneer Day holiday is confusing to a lot of people. Immigrants enjoy the day off, but can’t wrap their heads around the reason for it—well, lots of them know the why of it, but still don’t grasp why that why matters.
It all started back in 1847 when Mormon leader Brigham Young’s wagon pulled into the Salt Lake Valley and he raised up from his sickbed and said this was the place the Mormons (having been chased out of New York, Ohio, Missouri, and Illinois) would settle. His declaration was no big surprise—some advance members of the expedition were already here plowing when Brother Brigham showed up—but he made it official. He hadn’t asked permission to settle here, either from the bands of Ute and Shoshoni and other Indians who frequented the area, or from Mexico, which held title, such as it was, to the place.
But here the Mormons settled anyway, intending to form their own little nation with a theocratic-type government. But, much to their surprise, they soon ended up back in the United States in 1848 when the land was seized following the Mexican-American War.
Commemorating the arrival of those Mormon pioneers in the Salt Lake Valley is the reason for all the hoopla. I don’t know why that’s so confusing. When I lived in Nevada, most of that state shut down for a day in late October to celebrate Nevada Day, commemorating statehood. (Nevada, by the way, was originally part of Utah before the federal government started slicing off chunks to make and add to the new state. The same thing happened with parts of Colorado and Wyoming, too. The Mormons originally claimed big chunks of California, Arizona, New Mexico, and Oregon as well, but the government never recognized that claim. It’s all covered in a chapter of my book, The Lost Frontier.)
But never mind all that. Just have a happy holiday. We could all use an excuse to celebrate.

Since the late nineteenth century, the American West has been an environmental battleground. At one extreme, rabid capitalists see the region as nothing more than a rich land to be exploited for personal gain, never mind the effects their profiteering has on the land and the people who live on it. At the other extreme are radicals who believe mankind has no place in the West; that it is best left to the elements and we humans should only be allowed to sneak in and take a peek every now and then, then leave.
Most folks, as is usually the case, are sandwiched somewhere nearer the center of those extremes and look to achieve some kind of balance betwixt and between. Even then, viewpoints are fervent and disagreements intense.
Although somewhat dated since its publication in 1971, Encounters with the Archdruid by John McPhee paints arguments between conservation and development in vivid colors. And, the fact is, the arguments have changed little since then—or ever.
The book sets the views of David Brower, outdoorsman and long-time leader of the Sierra Club and the titular “Archdruid,” against three powerful men with contrasting views. One of the encounters lies outside the West, featuring a real estate developer on Hilton Head Island off the South Carolina coast. Another concerns mineral mining in remote areas, specifically in a wilderness location in the Cascade Range. The third, and most engaging for me, pits government dam builder Floyd Dominy against Brower during a float trip through the Grand Canyon.
McPhee, a meticulous reporter and imaginative writer, allows each man to state his case during each encounter, and allows readers to take from the debates what they will. And, like all good art and literature, Encounters with the Archdruid asks a lot more questions than it answers.

Posted by writer Rod Miller at 7:33 AM 2 comments:

A Viewers Guide to Roadside Animals.

Few things—if anything—in life gave my Dad more pleasure than horses and cattle. He knew them well and worked them like few have the ability to do.
But even when not working, you might find him out in the corral “messing” with the horses. You’d often find him horseback in the pasture, or sitting on the tailgate of the pickup truck, or on the tractor seat after winter feeding just watching his cows, long beyond his original reason for being there.
When traveling, he always noticed cattle and horses in the pastures and on the open range flying past the windshield. He’d comment on how “slick” (or maybe “poor”) the cows looked, admire the growing calves, point out a well-made range bull, praise horses and colts.
While not as practiced at it as Dad, it’s a practice I picked up from him. Our car often hears comments about grazing cattle, usually accompanied by regret that almost all of them nowadays are black. Sighting a herd of our favored Herefords gleaming red and white in the sun is a rare and precious thing. Were you with us, you’d also hear my mockery every time we pass one of those yellow diamond-shaped roadside signs warning of livestock grazing on open range—with a picture of a dairy cow on it.
But, perhaps, my favorite remark concerning roadside animals is one I heard decades ago from a rodeo traveling pal; a comment that betrays a real love for the sport. Drive past horses in a pasture and Marlowe “Bird” Carroll would likely say, “You think those horses would buck?”
I still wonder.