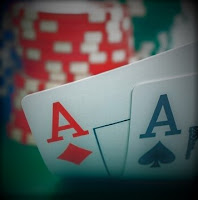 In a recent post I mentioned the on-screen chemistry between Paul Newman and Robert Redford in Butch Cassidy and the Sundance Kid and The Sting. Some readers wrote to say they agreed that it was a fine pairing. That set me to thinking about other pairs that, together, made their characters and the movie better than they would have been otherwise. Here are some that are embedded in my memory as winning pairs—pairs of aces, if you will.

At the top of my list has to be Tommy Lee Jones and Robert Duvall in the television mini-series Lonesome Dove. Both these actors are favorites of mine, and together they made one of the best duos ever.

Going back a few years, there’s the unforgettable combination of Glenn Ford and Henry Fonda in The Rounders.

Ed Harris and Viggo Mortensen were outstanding in Appaloosa. An altogether different kind of movie, a hilarious spoof of Westerns, teamed up Jackie Chan and Owen Wilson in Shanghai Noon. In the category of remakes that improve on the original as well as demonstrate the importance of casting, don’t miss True Grit with Jeff Bridges and Matt Damon (and, of course, Hailee Steinfeld).

Finally, there’s a movie on my list far removed from a Western—but it stars two old cowboys who can’t help but be cowboys. Wilford Brimley and Richard Farnsworth were a pair of aces in the baseball movie The Natural—two actors I liked in any role, and especially enjoyed seeing together. They also co-starred in a short-lived TV series, The Boys of Twilight. It was set, and shot in part, in my home state of Utah. I didn’t see it (me and everybody else, it seems) but I hope to find it somewhere, somehow. Those two old codgers make a good pair to draw to.

Posted by writer Rod Miller at 9:51 AM