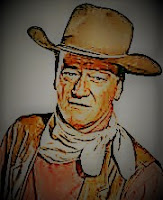 At the risk of sullying whatever credentials I carry in the cowboy and Western cultures, I have a confession to make.

I am not a big fan of John Wayne.

Once you have caught your breath, please read on.

On the other hand, when I watch what I consider better actors, I see a cowboy played by Robert Duvall. A gunfighter played by Clint Eastwood. A lawman played by Jeff Bridges. And so on, to include Tommy Lee Jones, Robert Redford, Richard Farnsworth, Gene Hackman, Tom Selleck, Paul Newman, Ed Harris…. You get the idea. I like actors who become the character they portray, rather than the character becoming the actor. To me, it is not a subtle distinction.

I once penned a profile of John Wayne as part of a collection of influential Westerners I wrote for American Cowboy magazine. I guess it was suitably reverential as it drew a fan letter—a brief email, actually—from one of John Wayne’s sons, praising the piece and saying it was one of the finest tributes he had ever read about his father.

I meant every word of it. Still…