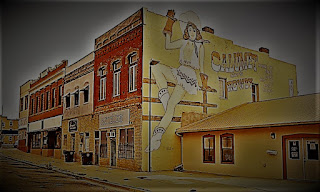 For several years now I have wanted to visit Las Vegas.
Not that one.
I have been to Nevada’s Sin City more times than I care to remember, and only revisit when there’s a reason—say a rodeo, or a conference, or, in the past, family. The city’s main attractions hold no attraction for me.
I’m talking about the other Las Vegas.
Las Vegas, New Mexico, is of interest to me for its historic importance. It was a waystation on the Santa Fe Trail, for example, and played a role in the Mexican-American War and the Taos Revolt. And over time it has hosted Indians, Spanish colonists, cowboys, outlaws, lawmen, railroaders, and other pivotal figures in the history of the West.
Later, movie and TV folks showed up, and still do from time to time.
I once got within about 100 miles of the place when approaching from the north, but took a left turn for Amarillo. I once got within 50 miles when approaching from the south, but took a left turn for Albuquerque. When visiting Glorieta Pass while doing Civil War research I came within 40 miles, but u-turned for an engagement back in Santa Fe.
One of these days, I will make Las Vegas my destination, and I will see the sights on both sides of the Gallinas River.
And the city lights, such as they are.

Posted by writer Rod Miller at 8:42 AM