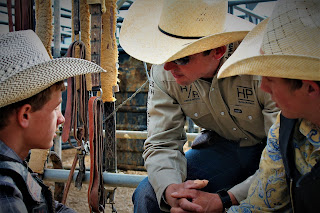 For ten nights in a row recently, we sat in front of the TV watching the National Finals Rodeo. We were especially impressed with how well the cowboys from Utah did, bringing home several world championships.
For years now, the saddle bronc riding at every level in rodeo has been dominated by the Wright family of Milford, a small, small town way off the beaten path in southern Utah. Before this year, six Wright brothers had won among them five world championships and more other accomplishments than you can imagine. The oldest of the brothers, Cody, won two of those world titles.
Now, it’s his sons who are in the limelight.
Back in 2018, I wrote a magazine article about that next generation of Wrights. I spent an afternoon and evening with two of the boys at the Utah State High School Rodeo Finals. The picture above is from that day—that’s father Cody in the middle offering advice and encouragement to his sons Ryder, on the left, and Rusty on the right. Too young for high school rodeo at the time was another son, Stetson.
All three are now full-time professional rodeo cowboys, and proved themselves the best of the bunch at the recent NFR.
Rusty, the oldest at 25, tied for first (with his brother) in a go-round of the saddle bronc riding, placed in seven of ten go-rounds and fifth in the average, and came away ranked fourth in the world standings.
Ryder, at 22, placed in nine and won or tied for first place in five saddle bronc riding go-rounds and won the average, and walked away wearing the World Champion belt buckle (for the second time).
Stetson, at the ripe old age of 21, won one saddle bronc riding go-round and tied for first in another and ended up seventh in the world standings. Stetson also rides bulls and won four go-rounds at the NFR and was crowned world champion. He entered the National Finals Rodeo second in overall winnings for the year in the All-Around Cowboy race, but passed the leader and left him more than $158,000 in the dust, bringing home his second All-Around Championship.
The Wrights are a wonderful family, making history in more ways than one, both in and outside the rodeo arena. It has been a pleasure to know them over the years, and we’ll be hearing more of them in the future.
It also bears mentioning that Kaycee Feild—son of the late Lewis Feild, five-time world bareback riding champion—matched his father’s accomplishment by winning his fifth world championship in my favorite rodeo event.