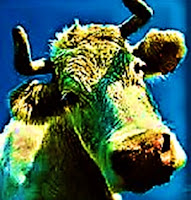 Henry Miller, the Elberta farmer who also owns a ranch near Jamison Hill on the old road, had a narrow escape from death yesterday when he was attacked by a cow which was no doubt suffering from rabies. Mr. Miller was at work near his home when the cow made a vicious charge upon him and then continued the attack after the farmer was knocked to the ground. Just at a time when Mr. Miller appeared to be in the greatest danger of receiving fatal injuries from the animal’s hoofs and horns the cow took a fit and this enabled him to crawl to a place of safety.

Propped up in bed at his ranch last evening Mr. Miller related his experience to Lewis Merriman, superintendent of the Yankee Cons mine, stating that the cow probably belongs to one of the Elberta ranchers. Mr. Miller’s injuries are painful but not serious and he will no doubt be out again within a few days.

Henry is my great-grandfather. And to think my very existence on earth was endangered by a bad, mad cow.